Technology in the lives of Educators and Early Childhood Programs: 2018 Survey 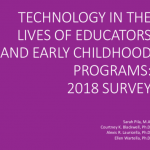 This research report presents updated trends on early childhood educators’ access to and use of technology as of January 2018. Additionally, the report describes educators’ awareness of and familiarity with the 2012 position statement of the National Association for the Education of Young Children (NAEYC) and the Fred Rogers Center to better understand its impact on the field of early childhood education.

Exploring how teens and parents responded to 13 Reasons Why

This research report presents findings from a global survey of more than 5,000 adolescents, young adults, and parents of adolescents from the United States, the United Kingdom, Brazil, and Australia/New Zealand. The main objective of this survey was to examine how viewers of 13 Reasons Why, a show that features tough topics in its narrative, perceived, related to and were reportedly influenced by the the popular Netflix series. 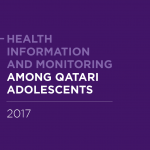 This report presents the results of the first comprehensive and large-scale investigation of Qatari teenagers’ health-information and health monitoring behavior. A survey of more than 1,100 Qataris, 13 to 20 years old, conducted in spring 2017, addressed which health issues they are most concerned about, how often they use various types of health monitoring tools and communication platforms to seek health information, how satisfied they are with what they get through these platforms and tools, how much they trust health information channels, and whether they have ever attempted to change their behavior due to health information or digital health tools.

The Common Sense Census: Plugged-In Parents of Tweens and Teens

Tweens and teens have access to a number of media technologies and often own their own personal devices. It is not clear, however, how parents navigate and manage this media environment with their children. The main goal of this survey is to provide current information about parent perceptions of and behaviors regarding youth media use. This study seeks not only to understand how parents personally engage with media in the home environment but also how they monitor and perceive their children’s media-use experiences. This report was commissioned by the three U.S. Department of Education 2010-2015 Ready to Learn Television Program (RTL) Grantees to provide an independent analysis of the research findings and lessons learned from the RTL Television Program’s 2010-2015 grant cycle. The main objective of this policy brief is to summarize findings across the three RTL grantees’ projects to examine the impact of the RTL Program, and provide recommendations for future support for and work in children’s educational media.

Technology in the Lives of Educators and Early Childhood Programs: Trends in Access, Use, and Professional Development In the current survey, we were interested in following trends from our earlier reports to see if and how the educational technology landscape has shifted, especially in light of the rapid adoption of tablets (iPad, Kindle Fire, Nexus, etc.) in the general population. We were particularly interested in how educators felt supported to use technology in their programs and how professional development influenced such use. One of the key messages of the position statement is that early childhood educators need training and professional development to develop the knowledge, skills, and experience needed to be successful at integrating technology in developmentally appropriate ways.

Blackwell, C. K., Wartella, E., Lauricella, A., & Robb, M. (2015). Technology in the Lives of Educators
and Early Childhood Programs: Trends in Access, Use, and Professional Development. Report for the
Center on Media and Human Development School of Communication Northwestern University & The
Fred Rogers Center. If there is one thing that defines the current generation of teenagers, it is the degree to which they are always “connected”—spending vast amounts of time online and on their gadgets, using social media, surfing the web, watching YouTube videos, Tweeting, and using apps. The teenage years are also a time when young people grapple with a tangle of health concerns, many uniquely important during these particular years of life. From puberty, hygiene, and childhood obesity in the early years to sexual activity, drugs, and alcohol in the later years, teens must traverse a landscape replete with significant new health challenges—often while coping with substantial amounts of stress and sleep deprivation. Increasingly, public health organizations that are trying to reach teens with health communications are doing so online, making heavy use of websites, social media platforms, and texting campaigns.

Click here to learn more about the Teens, Health, and Technology conference. American students under-perform in the domains of mathematics and science, undermining the intellectual and economic potential of future generations. Researchers have proposed that meaningful exposure to science, technology, engineering, and mathematics (STEM) concepts through mass media and interactive technology platforms may augment learning in young children. Consequently, leading experts in the fields of communications and media studies, cognitive and developmental psychology, computer science, human development, and education gathered at Northwestern University in June 2014 to discuss findings across these fields that can contribute to the debates about children’s STEM learning through interactive media and to formulate a series of research projects that might address these complex issues. This report highlights key points of discussion with the hope of catalyzing further discussion, inquiry, and research.

Prepared by Leanne Beaudoin-Ryan, Ph.D. (2014). Using Educational DVDs to Enhance Preschoolers’ Education: A Collaborative Project Funded by the National Science Foundation. A workshop report of the Center on Media and Human Development at Northwestern University, The Children’s Digital Media Center at Georgetown University, and the Childhood Cognition Laboratory at the University of California Riverside.

Parenting in the Age of  Digital Technology: A National Survey In the popular press, much is made about how new digital technologies such as iPads and smartphones are revolutionizing family life. Children and parents alike now have a growing stream of new technological resources at their fingertips, offering increased opportunities for engagement, entertainment, and education. But while anecdotes about families and media abound, empirical evidence on national trends is much harder to come by. This study explores how parents are incorporating new digital technologies (iPads, smartphones) as well as older media platforms (TV, video games, and computers) into their family lives and parenting practices.

Wartella, E., Rideout, V., Lauricella, A., & Connell, S. (2014). Revised Parenting in the Age of  Digital Technology: A National Survey. Report of the Center on Media and Human Development, School of Communication, Northwestern University.

Click here to learn more about the Parenting in the Age of Digital Technology conference. We know from previous studies—and from what we see in the world around us every day—that electronic media play a huge role in children’s lives, starting at younger and younger ages. Marketers and all types of large corporations seeking to better understand these trends so they can capitalize on them with the next hot app, merchandisable cartoon character, or thoroughly addictive video game. But understanding these trends is also critical for those who strive to use media to promote children’s well-being and therefore need to understand the relationships between media use and children’s academic achievement, health, and social-emotional development.

A Framework for Quality in Digital Media for Young Children Fred Rogers believed that all adults who have anything to do with teaching, nurturing, and entertaining young children should see themselves as caregivers who, without exception, “think of the children first.” Today, the ubiquity of digital media in homes, schools, and community sites for informal learning provides both the opportunity and the responsibility to use these new and rapidly developing tools with care. Just as parents and educators are challenged more than ever in their intentions to make thoughtful decisions about the selection and use of digital media with young children, even the most well-intentioned and socially responsible media professionals increasingly are challenged to demonstrate the value of their products. This report documents differences in the role of media in the lives of White, Black, Hispanic, and Asian children in the United States: which types of media they use, how much time they spend in various media activities, which media platforms and devices they own, and what the media environment is like in their households. The data presented here are the result of new analyses of two data sets, breaking out the findings by race and ethnicity: the 2010 Kaiser Family Foundation Generation M2 survey of media use among 8-  to 18-year-olds, and the Foundation’s 2006 survey about media use among children age six and under (The Media Family).

Click here to learn more about the Children, Media, and Race conference. It is hard to find a national study of children’s use of media in the past 20 years that does not demonstrate that media, and especially television, are a dominant activity of childhood. And young children, from birth to age 8, have incorporated media technologies into their out-of-school lives in unprecedented ways in recent years. Early media use is now the norm, with baby videos and 24/7 cable television for children used by even infants and toddlers. On average, American children under 8 spend about 3 hours a day with television (Rideout & Hamel, 2006). The hearth is clearly an electronic one in the homes of American families. While much has been made of the growing use of media by children at home, far less is known about how media technologies are used in the various early childhood school settings in which young children participate.